Our high-quality, affordable care for Parkinson’s gives you full control and choice with your care so it fits around your lifestyle, likes and dislikes.

We’ve gained a reputation for providing high-quality, person-centred care for people living with Parkinson’s disease. It’s down to us working with you to create a care plan tailored to meet your unique requirements.

What Parkinson’s care and support does Agincare offer?

We offer three types of care:

Complete our short online cost calculator to receive a personalised indication of the level and cost of live-in care based on your needs.

Our high-quality, affordable home care and live-in care services give you full control and choice with your care so it fits around your lifestyle, likes and dislikes. We go the extra mile to understand what you need. This covers not only your care and support needs, but also what is important to you such as hobbies, cultural and religious preferences and your social and family commitments.

What are the advantages of live-in care?

We will encourage you to be as independent as possible. We’ll give you and your family and friends information about local groups and other resources to help you.

We understand that your symptoms and the way they affect you physically, socially and emotionally will be particular to you. Your care worker and our trained assessors will continually review your care and support needs with you, to make sure you’re getting exactly the care you need.

Call us now on 01305443115 to talk to our team about how we can support you or a family member with personalised care.

What is Parkinson’s disease?

Parkinson’s disease is a progressive neurological condition in which parts of the brain become progressively damaged over many years. It affects one in every 500 people. That’s about 120,000 people in the UK.

Most people who get Parkinson’s are aged 50 or over, but younger people can get it too. One in 20 people with Parkinson’s is under the age of 40.

The three main symptoms of Parkinson’s disease are:

A person with Parkinson’s disease can also experience a wide range of other physical and psychological symptoms, including:

Parkinson’s is caused by a loss of nerve cells in the brain. This often results in slower movement, meaning it takes longer to do things. It is not known exactly what causes Parkinson’s, but it is thought to be a blend of both genetic and environmental factors.

All our care and support staff complete the nationally recognised care certificate. Specific client needs-led training is taught by internal and external trainers and/or healthcare professionals.

We also have an internal ’Understanding Parkinson’s’ training programme.

Call us now on 01305443115 to talk to our team about how we can support you or a family member with personalised care.

Read about our care types

On 27th June 2022, we announced the extraordinary winners of our first ever Agincare Heroes Award. The exclusive ceremony was preceded by welcome drinks and lunch before winners were honoured …

Anticipation is brewing as we prepare for the upcoming Care Home Open Week! This week is the nationwide initiative from Championing Social Care, inviting communities to visit their nearest homes. … 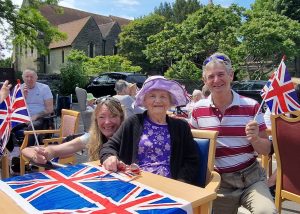 A right royal party: celebrating the Jubilee in our care homes

Our care homes put on a right royal show for the Queen’s Platinum Jubilee! With Queen Elizabeth II celebrating 70 years on the throne this June, our care teams and …

View All News
Find Out More