We are delighted and honoured to announce that our Chief Executive Raina Summerson has been recognised as an Ambassador for John’s Campaign. It is a national campaign which stands up for the crucial role of family members and loved ones in caring for people living with dementia.

The campaign was founded by Nicci Gerrard and Julia Jones in 2014 following their experiences with the care of Nicci’s father Dr John Gerrard, and Julia’s mother June.

No one should enforce disconnection between family carers and those who need their expert knowledge and their love. This principle is applicable everywhere: in the doctor’s surgery, the A&E ward, the dementia assessment unit and the care home.

It emphasises that family carers/ loved ones should not just be allowed, but should be welcomed into all care settings, calling for:

Agincare has been a strong advocate, and long-standing supporter, of John’s Campaign.

I feel incredibly privileged and honoured to formally become a John’s Campaign Ambassador. Agincare remains proud to support John’s Campaign, having been one of the very first independent social care providers to sign up to the campaign many years ago. The passion and commitment from Julia and Nicci to raise awareness of the message is tremendous but shouldn’t be needed to this degree.

The essence of valuing and ensuring inclusion for family and friends in people’s lives when they are receiving care and support services is absolutely key. To me, it simply supports the best outcomes for people living in our homes, for their families and friends but also for our teams, who greatly value the interaction, support and knowledge provided.

Along with our teams, I am committed to support John’s Campaign whenever and wherever I can. Let’s always think about how we can all make things happen together, and how we remove, what are at times, very real barriers, to make a difference to peoples’ lives – that’s why we are all supposed to be doing what we do!

With over 20 care and nursing homes nationwide Agincare knows just how valuable and important family members and other loved ones are to the well-being of its residents. Agincare actively supports family carers to be with people living in its homes, and as an integral part of their ongoing support and care.

This has never been more important than during the Covid pandemic. Raina and Agincare have promoted the work of John’s Campaign, and supported its lobbying work with contributions to briefing papers and witness statements for judicial reviews.

Whenever Raina says yes to something she gives it 101%. This is just another example of her high standards and willingness always to do that bit more. At John’s Campaign we are so grateful for the way she has understood what we are trying to achieve, even in most difficult times, and has given all the support in her power – both professionally and personally.

This is because she is committed to doing her best for others, especially those who don’t have a public voice of their own. Thanks to Agincare for your John’s Campaign pledge and for doing your best to continue putting it into practice.

Raina Summerson is Chief Executive of Agincare, a leading independent provider of high quality care nationwide, including care homes, domiciliary care, live-in care, extra care and supported living. Raina is a qualified social worker, with a Masters in Mental Health Services and has worked in social care since 1989, both privately and in Local Authority/NHS environments.

Before joining Agincare, in 2004, Raina was a Regulatory Inspector with five years’ experience of registering and inspecting care homes and domiciliary care agencies.  Raina is closely involved with national bodies lobbying for the social care sector, and is a Fellow of the Institute of Directors.

Find out more about John’s campaign

At St Peter’s Park, our Bexhill care home activities are a way of life. We pride ourselves on going the extra mile, or air mile in this case… Armchair travel … 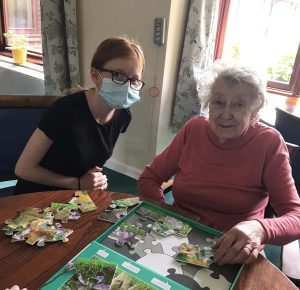